What is Ashtanga Vinyasa Yoga?

Ashtanga Vinyasa Yoga which is popularly known as Ashtanga Yoga is a style of yoga derived from one of the classical yogic texts called “Yoga Kuranta” by Yogi Vamana. The style was rejuvenated by Sri T. Krishnamacharya, the master of B K S Iyengar as well as Sri K Pattabhi Jois in Mysore India. Following the master’s path, Pattabhi Jois has taken this beautiful style to the hearts of yogis around the world. Later, his grandson, ‘Sharath Jois’  is carrying the lineage of Ashtanga Vinyasa.

Ashtanga Yoga is a practice of sequenced postures with its flow and grace. The postures are derived from “Yoga Kuranta” which was written by Yogi Vamana and re-invented by Ram Mohan Brahmachari at the beginning of 20th century. It was transmitted through his teachings to Sri T Krishnamacharya in the Himalayas. After his studies with the master, Krishnamacharya returned back to his hometown “Mysore” to continue the teachings of Ashtanga Yoga in Mysore. Ashtanga Yoga is classified into six different series of practices which makes the practitioner embrace the sublime layers of the mind with the graceful flow of the practice.

Awarded one of the top 50 Ashtanga Yoga YouTube Channels 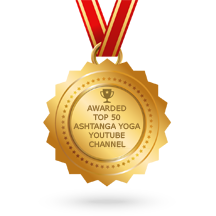 Read: Why do we teach Ashtanga Yoga Teacher Training?

Ashtanga Vinyasa Traditional Practice consists six series.  Based on Yoga Kuranta, Ashtanga Vinyasa Practice is not just a physical practice, but can be transformative at different levels of human system. It is one of the best methods of Hatha Yoga in order to deepen your practice of Raja Yoga. During this 200 Hour Ashtanga Yoga Teacher Training, we explore the primary series or Yoga Chikitsa.

The Primary/first Series of Ashtanga Yoga is known as “Yoga Chikitsa or Yoga Treatment” which primarily consists of forward folds along with twisting, hip opening and balancing. Over 70 postures are sequenced in a systematic way so that it can heal the system and refine the practice in a sequential flow blended with Ujjayi breathing.

The Advance Series has four sequences such as Advance A, B, C & D and altogether they are termed as “Sthira Bhaga” The tradition allows the practitioners to practice every series in the order as every previous series is a preparation for the next series.

Tristhana method is a combination of posture, breath and gaze. Incorporation of the three during the practice assists in cleansing of the body, nervous system and the mind.

Veda Vijnana Gurukulam, an Indian Vedic-Yogic Gurukulam system is the root from which Samyak Yoga has been flourishing as one of the fastest-growing Yoga Families in the world. Our Acharya (Guruji) is Ramchandra Bhatt is the mentor, guiding force behind the development of Samyak Yoga who of course, does not teach in the Teacher Training Courses. It was a blessing to be taught by Acharya, who is the reason behind the dream called “Samyak Yoga”.

Yoga Teacher Training includes the transportation from the airport, food and accommodation at Samyak Yoga Ashram. Please visit the link mentioned below for the details which help you in better organising yourself for intensive Yoga Teacher Training.